Networking Questions and Answers for Freshers IT Officers PDF 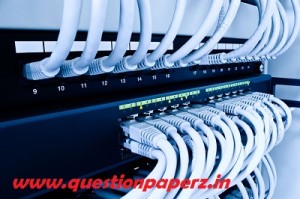 Q1: What is a Network? Explain the term “Networking”.

A: In terms of computer science, network is a collection of two or more computer connected together is a Network. For Example- LAN, WAN, MANs. Networking is a process in which computing devices are connected logically and physically for sharing data with each other.

A: Node is the smallest unit and it is connection point through which connection and data transmission is possible. Different devices connect together through a node and it can be your computers, mobile phones.

Q4: What is Gateway and Router?

Routers: It is layer 3 (Network) devices used to connect two or more network together and it forward data packets between them.

Q5: What is point to point link?

A: It is a wire or any connection medium which connects only two computers. It is opposite to topologies as here only two circuits are connected.

A: It is also called as Channel Access Method in which several devices are connected to same medium and then share the data. This method is totally dependent on the multiplexing. There are four types of Channel Access Schemes-

PDF File link for Networking Question and Answer for Interview will be made available on the request. Hope you have liked the above questions like us on Facebook for daily updates.